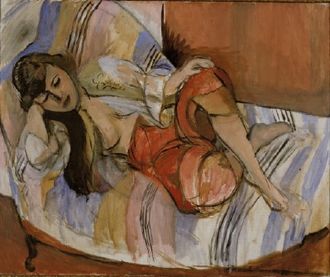 Albert Stern gave this painting to the museum for safekeeping either just before or at the start of the war together with two other paintings. In October 1940, the painting was registered under the name L. Bangma. Why Stern relinquished the work is not clear.

Stedelijk Museum bought the painting in 1941 from L. Bangma of Santpoort. Bangma’s accounts record on 19 July 1941: ‘1 Schilderij ‘Odaliske’ by Henri Matisse ƒ5000.- excl: tax.’ Elsewhere in the museum archive, the name appears as ‘Hr Stern Bangma’. Albert Stern was a German Jewish businessman in the textile trad, a joint owner of Graumann & Stern in Berlin. Lieuwe Bangma was the firm’s Dutch representative. Although the three paintings are recorded in October 1940 under the name L. Bangma, it was Albert Stern who signed the receipt in March 1941 together with Bangma when they received the three works back. Bangma sold the painting to Stedelijk Museum a few months later.

Albert Stern may have bought the Matisse at Galerie Alfred Flechtheim in Berlin. A Flechtheim label on the reverse of the painting has the numbers 1215, 4189, 14112 and the title ‘Odalis[...]’. In 1930, Flechtheim hosted an exhibition of work by Matisse, Braque and Picasso in German collections in Berlin. The list of exhibits includes Die Odaliske, dated here as 1923. In the catalogue, Flechtheim thanks Albert Stern for making the show possible. Perhaps Stern had already bought the work from Flechtheim.
Albert Abraham Stern (b. 1861, Grätz) and his wife Marie Ebstein (b. 1878, Breslau) fled from Berlin to the Netherlands in early 1937. Albert Stern died on 18 January 1945 at Laufen-Salzach. Mrs Stern-Ebstein survived the war and moved to Manchester the summer of 1946. They had one son and one daughter. During the war, the Bangmas looked after Albert Stern’s two grandchildren.

The museum is in contact with relatives of Albert Stern.

Odalisque is also known by an alternative title: Bajadère.